Siruthai (English: Panther) is a 2011 Indian Tamil-language action film directed by Siva.[4] It is a remake of the 2006 Telugu film Vikramarkudu, directed by S. S. Rajamouli. It stars Karthi playing dual roles, alongside Tamannaah and comedian Santhanam in the lead roles. The film was produced by K. E. Gnanavelraja and features music by Vidyasagar. It was released during Pongal on 14 January 2011. Despite gaining mixed critical response, the film was a success at the box office.

Rocket Raja is a small-time thief in Chennai who steals anything he comes across with his partner Kaatu Poochi. He enjoys his life to its fullest and goes to rob in a marriage function. There he sees the midriff of Swetha is exposed. Raja, who is a belly fetish touch her hip and become lovers. However, his life changes when a small girl named Divya Rathinavel ends up in his care; he looks exactly like her father, DSP Rathinavel Pandian IPS.

As Raja discovers the girl's past, it is revealed that Rathinavel is an honest policeman who is a nightmare to criminals, but the gang of criminals in the village of Devi Pattinam, Andhra Pradesh are intent on killing him and his daughter because he killed the son of a prominent criminal Bavuji, who also sexually abused women. Rathinavel's colleagues put Divya in Raja's care so that the criminals cannot take her. Rathinavel is on the verge of death following a gunshot to his head.

At first, Raja is angry with Divya and breaks her tape recorder. Divya is happy and hugs him after he repairs it. When Swetha comes to Raja's home with her parents, she sees Divya and thinks that she is the daughter of Raja and breaks up with him. Rathinavel is intent on fighting back. Unfortunately, he dies following a battle with several criminals who had been chasing Raja and Divya. From police officers, Raja realises that Rathinavel was an honest and courageous police officer who stood against Bavuji and his family, who had cruelly ruled a village. Rathinavel even manages to kill his son and stops their criminal acts. He also manages to fail Bavuji's brother Badra, but he gets shot when he tried to save a child.

Upon seeing his courage, Raja, with the help of Rathinavel's colleagues, steps into Rathinavel's shoes and finishes his unfinished work as he himself is a thug and destroys all their properties with the help of Kaatu Poochi in a hilarious way. There Swetha sees Raja, but raja tries to escape from Swetha because he is now Rathinavel, so Swetha exposes her navel in a saree, arousing Raja. He tries to control himself then grabs her hip tightly. Then she tells him to forgive her, and they again start their relationship. Raja also kills Badra and takes on the responsibility of taking care of Divya, with the help of Swetha. 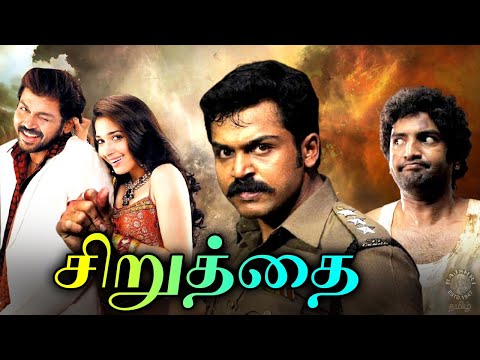 Siruthai (English: Panther) is a 2011 Indian Tamil-language action film directed by Siva.[4] It is a remake of the 2006 Telugu film Vikramarkudu, dire...